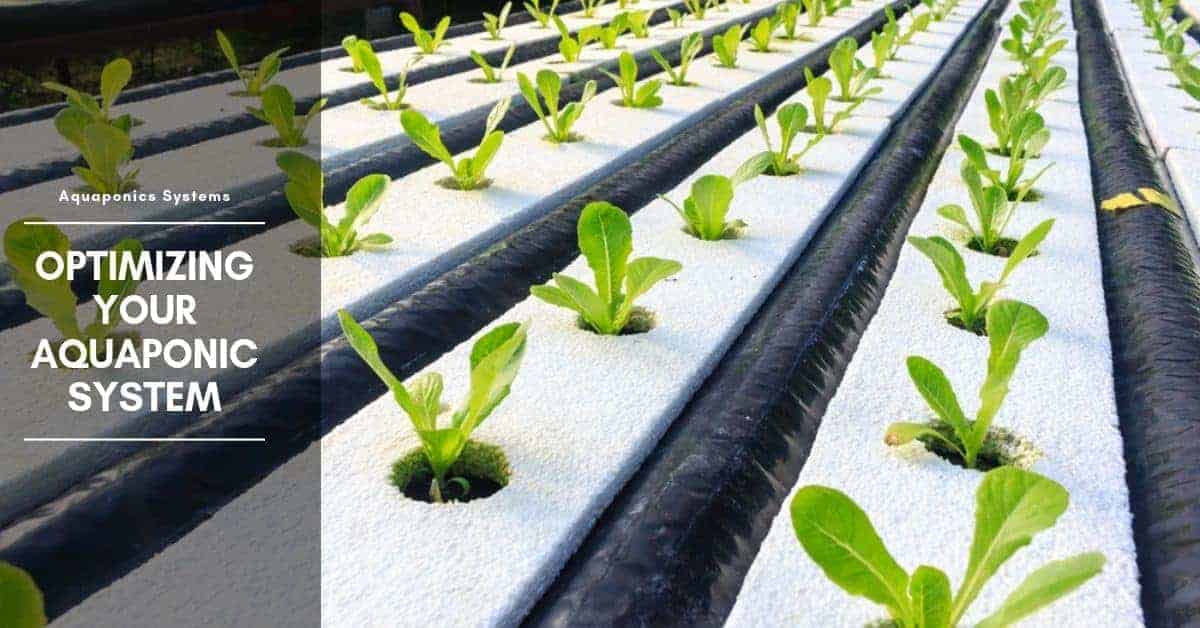 One way to optimize your aquaponics fish tank is to choose plants well-suited to your system design.

In square-bottomed tubes with Rockwool and a training system:

Training systems usually involve overhead wires or beams, run above the growing tubes at a height of about 6 feet (2m). A piece of string is attached above and run down to each plant. Attach the string to the seedling with a loose knot and the plant will naturally climb upward. It may be necessary to tie the plants at intervals. Encourage tall plants rather than bushy ones by pinching out any side-growth.

Most vegetables can be grown in Media Beds, and they are particularly suited to bushy plants which do not do so well in other systems, including:

Propagating your own plants

Plants for use in an aquaponic system can be easily propagated from seed. Seeds can be saved from your own crops, or purchased from certified suppliers.

Plant seeds into a soil-less growing media. Punnets filled with coconut fiber or peat work well, as do stone wool plugs. Keep the seeds moist using pure water, and when they have their second set of leaves, begin to dampen with a little water from the system or from cleaning filters, diluted at a ratio of 20:1. When the seedlings have 4 true leaves, they are ready for transplanting and the plugs can be popped straight into the growing tray or NFT tube.

Flood and Drain systems using clay beads are well-suited to propagation. Ensure that the maximum water level is 1-2 inches (2-5cm) below the surface of the growing media to avoid submerging seeds. Sprinkle seeds over the growing media and wait for germination. Alternatively, insert seeds into stone wool plugs, which can be “planted” into the growing media.

Planting a range of different plants will provide system security and ensure that all of the plants are not competing for the same micronutrients. Nutrient supplements are more commonly needed when systems are used to produce a plant monoculture.

Fruiting and leafy green plants can be utilized in different proportions in order to suit the amount of nutrients being produced by the system, which will, in turn, be affected by the stocking density of fish populations.

Staggered plantings, with roughly equal proportions of seedlings, maturing plants, and plants ready to harvest, are recommended. This method better balances the number of nutrients being drawn from the system at any given time, thus making inputs easier to calculate and preventing nutrient deficiency.

Aquaponic systems can be optimized through the use of fish polyculture, which means raising more than one type of aquatic species in the same tank. This makes better use of tank space and nutrients, depending on the specific behavioral habits of the chosen species.

Some fish are well-suited to polyculture, in particular, omnivorous fish. Catfish can be raised with other fish in order to better utilize tank space. Additionally, different species of carp can be raised together. There are many successful fish polycultures that can be used.

Additionally, many aquaponic units are run as a polyculture combining fish with freshwater crustaceans or mollusks. Neither mollusks nor crustaceans produce sufficient ammonia to be the sole “fish” in an aquaponic unit. However, as scavengers, they are efficient water filters, removing uneaten food and solid waste.

Crustaceans tend to be territorial and like to have rocks or logs to hide in or under. Ensure that any polyculture species are large enough not to become prey to one another; large crayfish will eat small fingerlings, while carnivorous fish will prey on small prawns.

The operating costs of an aquaponic unit can be reduced by supplementing fish feed with home-grown equivalents. In order to ensure that fish are receiving everything that they need to grow, they should still be fed at least 75% of a “complete” feed ration. The additional 25% of daily input can come from home-grown sources.

Duckweed is a high-protein aquatic plant that can be raised as a supplementary feed. It grows quickly and easily. However, under no circumstances should it be allowed to colonize the aquaponic unit, so only feed fish what they will eat. Other pondweeds and water plants may also make appropriate supplementary feeds.

Unwanted produce and plants can be used as supplemental feed. Vegetable matter from your garden is only suited for some specific species. Make sure you know which fish can feed on which vegetable produce. As this depends on the fish, it is difficult to provide a quick indication here.

A variety of live insects and insect larvae are suitable feeds. Some insects which are easy and cheap to raise on a home-scale include mealworms, black soldier fly larvae, and maggots.

Insect larvae should always be purged for 2-3 days before use, and should never be fed animal products if being fed to fish intended for human consumption.

Compost worms (red wrigglers, tiger worms, and others) produce prolifically and can be raised on vegetable scraps as a supplemental protein source for fish. As with insect larvae, worms should be purged before use.

One of the most common problems faced by aquaponic growers is a system malfunction. Because fish and bacteria colonies are so sensitive to environmental changes, a small malfunction can result in deaths. As such, many growers take precautions to reduce the likelihood of a malfunction causing extensive damage to the system.

Some precautions which will help optimize your aquaponic system include the following:

If you are using water that requires treatment such as de-chlorination, or rely on electricity for your water source, keep a backup supply of water in the case of a system emergency requiring dilution or topping up. Water storage of at least 1/3 of the unit volume is recommended.

An additional holding tank for fish, equipped with a pump and filter, can be a valuable resource should the system experience toxicity or temperature issues. Holding tanks can also be used for fish showing symptoms of ill-health.

Float switches, like the ball-float valve found in a toilet, switch pumps on and off based on water levels. They can be used to prevent tanks from draining completely, or to stop them from overfilling, thus saving fish in the case of a system blockage or broken pipe. Pumps can also be fitted with shut-out valves.

Overflow pipes connecting grow beds/sumps and fish tanks can be used to ensure that fish tanks are not drained in the case of plumbing malfunctions.

A standpipe will prevent a tank from being completely drained and are an excellent addition to both biofilter and fish tank where practical.

Alarms can also be used to alert the grower when water levels fall or temperatures change. Additionally, some electronic meters have the potential to automatically alarm growers to system changes such as pH.

The health of an aquaponic system depends on pumps; without water and air pumps, water will cease to flow and oxygen levels will fall. In the case of a blackout or electrical problem, fish and bacteria can die in a matter of hours. For this reason, backup generators or batteries, in addition to extra pumps and aerators, are highly recommended. If possible, install these components to run automatically in the case of electricity outages.

It is worth noting that as fish grow, they will consume greater amounts of feed, affecting the equilibrium of the system. There are various ways to deal with this issue, including:

Under stocking the system so that maximum stocking density is only reached as fish are ready for harvest will prevent severe overpopulation. However, this means that plants underperform for the majority of the growth cycle.

Under stocking can be combined with altering plant proportions so that the vegetative part of the system does not underperform in the initial stages. This means that a greater proportion of leafy herbs, requiring fewer nutrients, are grown when fish are younger, and as fish waste increases more fruiting plants are added in order to use the increase in nutrients.

Fish of different ages or life stages are best separated, as larger fish tend to prey on the smaller ones. However, systems can incorporate several fish tanks so that different life stages can be incorporated and a more consistent input maintained.