Do you have a new planted aquarium that’s covered in brown diatom algae? Then Otocinclus Catfish may be your next best friend.

Keep reading as I share how I keep them happy, healthy, and well-fed.

Even though Otocinclus catfish are purported to be these fantastic algae eaters and a must-have for any planted tank, I was a little leery of them because I heard they’re notoriously sensitive to water quality parameters and hard to feed, aka not to beginner-friendly.

But when I first started my 20-gallon tank, it soon got carpeted by a thick

layer of brown diatom algae. Okay, no problem; this is a common occurrence with all newly set up planted tanks. All I got to do is cut in the nutrients, the lighting, etc… and it should go away, right?

Well, call me impatient, but after two months of having to scrub off manually brown algae of plant leaves using a toothbrush, I knew I needed help.

So what are Otocinclus Catfish?

Basically, it’s a genus of South American catfish, generally found in large swarms swimming in well-oxygenated, small streams, or near riverbanks, where there’s a lot of dense vegetation.

They typically grow to about 1.5 to 2 inches. Have a pretty streamlined flat profile with ideally a slightly rounded belly rows of armored plates on its body, and then, of course, a large sucker mouth, to cling on to surfaces like your glass or river rocks.

There’s something like 20 species discovered so far, I have no idea which species I have, but it’s like the most common one. The one that has like a black grey back, a horizontal black stripe running along the side of its body, and then kind of a white underside.

They’re very popular and readily available at most local fish stores for a pretty affordable price. I think I got mine for three dollars and fifty cents for five of them, and you get the sixth one free. So obviously they want you to buy schools of them.

The most important part is to make sure they’re well-fed, and kind of have a rounded belly when you get them. Because most of them are wild-caught, so when I got them I talked to my local fish store, and they said they had had them for three weeks and they were eating algae wafers and wood, but when I looked at them they liked to kind of I know, flat belly? Neither thin nor fat, so we’ll see how they do. Honestly, they’re actually not that hard to keep as long as you:

What Should be The Tank Size?

Don’t be scared of the fact when I say they need to be in a well-established mature aquarium. What I mean by that is it just needs to be cycled, so that you have 0 ppm ammonia and nitrates regularly. So in my case, I have such a high pH that 0.25 ppm ammonia would be lethal to them, unlike other hardier fish.

They are incredibly peaceful fish, and while I don’t see them in a lot of tight schooling behavior, they definitely enjoy each other’s company. So I would get at least three to six at a minimum.

As for tank mates, really anything that’s peaceful that would go in the community tank. So tetras, rasbora, corydoras, and even shrimp. Really just nothing that’s too aggressive, or big enough to eat them.

Unlike many other catfish species, they are diurnal, which means they’re awake during the day time, and you can often find them grazing off the walls of the aquarium, the leaves on aquarium plants, and the substrate even. But because they can be a little skittish at first, you do want to provide lots of covers and hopefully live aquarium plants. However, thankfully I found that over time I can get right up to them, and they’re pretty used to me, and they don’t swim away at all.

okay, let’s talk about dietary requirements because that’s definitely an area that a lot of people have trouble with. Now they are omnivores that like higher vegetable content, and a little bit lighter on the protein side.

Because in the wild, they like to eat Aufwuchs, which is basically that slimy film that covers underwater plants and rocks, and it’s primarily made of algae and diatoms. Still, there are also some little microorganisms, crustaceans like triops, and insects in them.

So in the soft green algae or brown diatom algae. And yes, they completely demolished all of the brown diatoms algae, and the shy guys take two days after I added them. Amazing.

But what happens when all that algae is gone? What are you going to feed these super picky eaters? Well, first of all, I did try algae wafers as my local fish store said they were feeding them. And they wouldn’t touch the stuff, so I don’t know maybe I was feeding the wrong brand. Instead, I would highly recommend that you get a jar of ‘Repashy Soilent Green‘ gel food, which is specifically made for Aufwuchs eaters like Otocinclus Catfish.

Now it may take them as a day or two to get used to, but once they get a taste of it, they cannot resist the stuff, it’s amazing. You can also feed them real vegetables meant for human beings. So my Otocinclus Catfish really like canned green beans, because they’re nice and soft, as well as

blanched zucchini slices. The trick here is to make sure to leave them in for 24 hours, so they get nice and mushy.

How to feed Zucchini?

If you’ve never blanch zucchini before, it’s super easy. I just bought an organic zucchini from the supermarket, cut it into like quarter inch or half

centimeter slices, maybe a little less, and then I cut the slices in half again. Dumped the slices into boiling water for about one to two minutes, and then once you removed all the water, you can put it on a baking sheet covered in foil so that each of the slices isn’t touching each other, and then freeze them.

Once the slices are individually frozen, so they won’t stick to each other as quickly, put it into a ziplock bag or other plastic container, and stick it in your freezer.

That way, every time you need a slice, you can get one out and plop it in the tank.

You can tell if your Otocinclus are eating well because if they’re hanging on the side of the glass, their stomachs look like there’s a half pearl on their midsections, and it’s super satisfying to see.

So are they worth it? I think a definite yes if you have a planted tank that has enough room for them.

I mean, I know they look a little bit drab at first, but I personally think they’re adorable with their huge black eyes, and that cool pattern they have on their tail, and then that crisscross last work on their body.

It is really neat to look at up close.

So, I have gotten them if I didn’t have any algae problems before?

Probably not, because there’s others cool oddball or more colorful fish out there.

But now that I’ve gotten them, they are super adorable, and I don’t think I could ever set up another planted tank without them.

Important Factors to Consider When Choosing Fish For Your Aquarium

Can Angelfish Live in Cold Water? Do I Need to Add a Heater to the Tank?

Corydoras Catfish Care: The Complete Guide to...
$9.99
Buy on Amazon
Bestseller No. 2 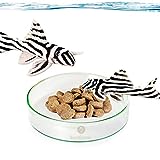